119: Choosing to Win Every Day with Dale Smith Thomas 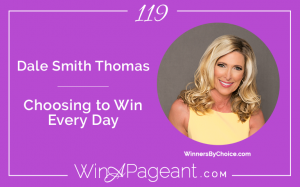 In this episode, Alycia interviews Dale Smith Thomas. Dale Smith Thomas credits winning the Mrs. Tennessee pageant for the launch of her international speaking career. Dale speaks professionally around the country and around the world on personal development, motivation and self-improvement. Her client list includes major companies like McDonalds Corporation, Northwestern Mutual Life, Turner Broadcasting, Sprint, The Million Dollar Roundtable and over 50 different hospitals. She has appeared as a guest expert on the Dr. Phil Show, and on The Big Idea, CNBC, and CMT.

Dale founded the “Boot Camp for Beauty Queens”, a prep school for pageant participants. Two notable attendees at one of her Boot Camps were Paris Hilton and Nicole Ritchie as part of the reality show, “The Real World”. An astounding 70% of Boot Camp attendees have gone on to win titles! (Not including Paris and Nicole.)

Dale has been a celebrity guest judge on the reality show “Pageant School – Becoming Miss America”, and recently hosted the Mrs. United States pageant. She has been the featured guest speaker for the last 10 years at Miss TN, MS and GA USA. She is also the host and speaker for America’s National Teenager of the Year.

Her upcoming book, “Good Morning, Gorgeous” will be released in mid-August of this year.