171: Clean Your Make Up Brushes Quick & Easy For Pageant Girls 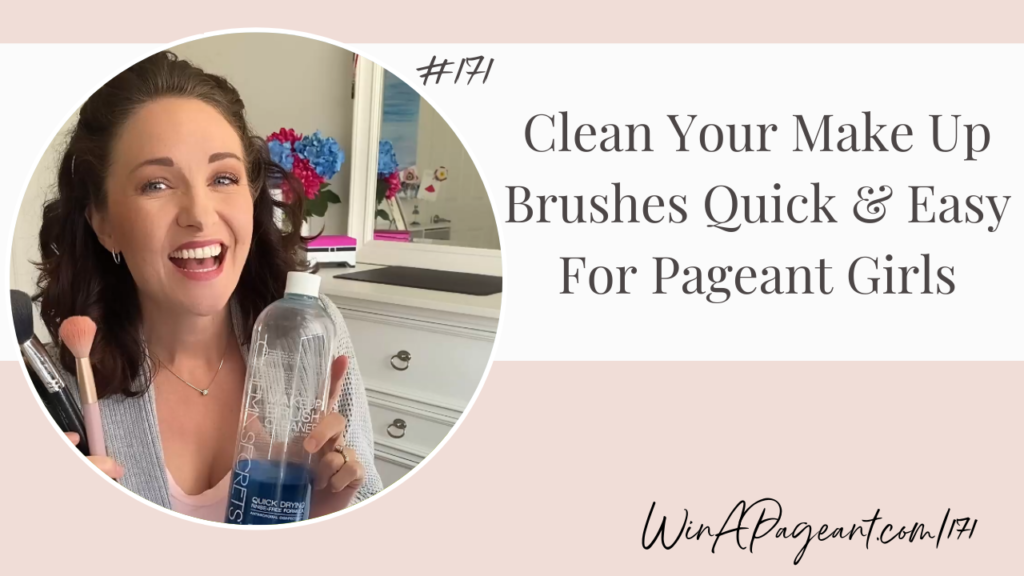 Today I wanted to share with you how I clean my makeup brushes. I’m going to show you what I use that was recommended to me once and it’s a phenomenal strategy.

First, we’re going to need the dirty brushes. I like to use a just regular dark black cloth with this to put down on my workstation, because it could get a little messy. And then I use a glass jar. Now, this is just a jar that I had a candle in it actually, and I just put it in the freezer,  popped the wax out so that I could use the jar for this.

The product that was recommended is what a ton of professional makeup artists use. It’s called Cinema Secrets.  This is straight up makeup brush cleaner. That is what it’s designed for. And you just want to pour a small amount into your jar. You do not need a ton. I’ve had this giant one for over a year, I wouldn’t recommend this giant bottle unless you’re a professional makeup artist, I would just get a smaller one because it does evaporate easily, even from the bottle. I’ll link that for you in my Amazon shop, if you go to winapageant.com/shop, you can find this brand.

Next, I grab this old washcloth that I only use to clean my makeup brushes, to wipe my brushes on after. Starting with my blush brush, you’ll see the color fade quickly. You put in about one-third of the bristles into the solution in the jar. It soaks it up when you dunk it in slightly, then pull the brush up, as it sucks up all of the solution. That’s what you want, because now it’s all saturating there and it’s kind of doing its work. I let it sit for just a moment or two, and then I just brush it out onto the washcloth. Really super simple. And this one you can’t tell as much because this is my blush brush, and the bristles are even a little bit pink and I’m using a pink washcloth so it’s not quite as obvious, but you’ll be able to see how beautiful the brush comes out in the end. Now it’s a little bit moist still, so I’m just going to set it aside on the drying towel.

Now let’s do this one. This is my cream foundation brush, it’s been through a lot! I think this one is from Sephora. I’m going to do the same thing as with the first one.  Just the top bristles, a third of it in, and it soaks it up the rest of the way. You let it sit for a moment. I’m going to let that one go. Let’s do this other foundation brush, just enough to let it kind of soak up.

Now, you never want to tip your brush when it’s wet. You never want to tip it upward, because these bristles go all the way into where they’re clamped. You don’t want it to get wet inside of the clamp. Some people wash their brushes with water and shampoo and that’s fine, but then it gets in here and it starts to rot and mold and it can pull the bristles out, so that is what you don’t want to do.

The reason it evaporates so quickly is because it’s like an alcohol, and it will evaporate inside of your brush too. That’s what you want. You want it to actually not stay in those bristles for long. As soon as you wash it off, you want it to evaporate and just be done so the chemical is not still soaking in there. It’s that easy. This cleans so quickly. In this one, you can really tell that it’s coming off. That’s great!

Now sometimes what will happen, like with this one I can tell, yikes, this one probably hasn’t been cleaned in a while because a ton is coming out here, so I’m going to do it a second time. I can still see there’s a little bit left on it, so I’m just going to soak up another little bit, let it sit for a moment to work its magic there and then brush it out again. And obviously I’m moving around this washcloth. I’m not just brushing in the same area. I’m moving it around so I’m not picking up the old stuff too. It looks like I need a little bit more. And like I said, I don’t fill this glass because I know it’ll just evaporate so quickly, so I just put a little bit in at a time to make it super simple.

Of course, if you are a professional artist, you’re probably washing them between every single client that you’re working with. So that’s why this brand is so great because it works so fast. Lastly, I’m going to do these small ones with what’s left. It does take a little bit of drying time, but not a ton because it’s that alcohol type of product,  like a rubbing alcohol wipe that evaporates fairly quickly.

So that’s that! I hope that I have encouraged you to wash your brushes. The benefit of washing your brushes is to really keep the bacteria off of your face. When you’re putting stuff on your face and then leaving it sit for a while, and then a week later you’re picking it up or the next day, and then you’re doing that for a week, then there gets to be some grimy stuff on these brushes. So, you just want to get that off of there so that you’re able to have the healthiest skin and that’s going to make the best foundation for any makeup that you apply.

I hope that this was helpful for you. Happy brush cleaning!