180: Confidence in the Face of Pageant Critics 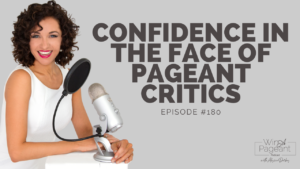 Today I want to give you two very specific strategies that can help maintain your confidence about competing in a pageant even when you’ve got naysayers and chase the dream that God has given you.

Strategy Number 1: This strategy is called “Re-framing” you may have heard of this before. It’s very common in self-help and self-development to reframe something is to basically look at it in a different way.

What I want you to consider is reframing your pageant competition. Though you’re running for a title that will represent your community, or state, or nation, I want you to reframe it as: instead of telling people that you are competing in a pageant, imagine what would change if you told them that you were running for public office. Right? If you told your boss or barista or your second cousin those types of things now instead of them being flooded with their uneducated stereotypes about pageantry, they will instead be flooded with their uneducated stereotypes about the political office.

Here are some similarities between politicians and pageant women:

1: Politicians have campaigns that they run on, and it’s very similar to pageant platforms. Often even in politics, it’s called a political platform.

2: Politicians support and speak for a group of people. That is exactly what you are doing as a pageant woman, right?

3: Politicians have a local, state, and national level; rules to win; and so do you. The same things are happening in pageantry.

4: Politicians also get voted into positions. So do you!

5:  Politicians must prepare for very difficult conversations to come up at any time and so do you.

6: Politicians do appearances all over the place.

Now strategy #2 is probably even more important, even though it’s not always possible and that is to plant yourself in rich soil. Just like a flower will bloom when it’s in perfect conditions and it struggles to bloom in poor conditions, the same will be true for you no matter what you are achieving in life. You may have to replant yourself, find good soil, find a place where people will welcome you where they’re cheering you on.

Sometimes, I understand you’re not able to leave the ‘soil’ you’re in because it’s your husband or your mom that is critical of you competing. Oftentimes those things can happen, and so you can’t just replant yourself, but what you can do is add good soil. So, if you’re unable to fully get out of the negative environment and replant yourself into a fully positive environment what you can do is at least add good soil.

And that my dear is how you win a pageant.