57: Getting Into the Top 5 by Overcoming Fear of The Unknown 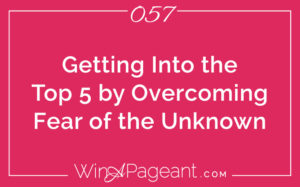 In episode 56, I shared with you the 3 simplest steps to take action and I shared stories of success and failure resulting from taking action and not. Today, we’re going to talk about one of the reasons why people – maybe even you – don’t take action.

Last week, I presented a challenge to take action on something small toward your big goal within the next 24 hours. What I know is that there were only about 10% of you who actually accepted this challenge and took action.

How do I know? Because most people – 90% – are average in life and in pageants. That’s why it’s such an honor to place in the top 5 of 50 contestants.

I’ve coached thousands of women all across the US in every major pageant system, and the ones that end up in the top 10% are the do-ers, not the dreamers.

Every single woman competing in a pageant has a dream – she believes she can make it to the top! She feels alive when she envisions herself winning the title! She’s passionate and excited!

But only 10% of women competing (who also have the dream, by the way), are do-ers. Only 10% of these women take consistent and committed action toward their goal. The top 5 are an elite group of action-takers that will likely be successful no matter what they attempt to accomplish. Why? Because they aren’t afraid of what they don’t know.

In this episode, I’m going to share with you how to overcome the fear of the unknown and create a strategy for your pageant success that will get you into the top 10% of elite pageant women.

First, let’s understand the Fear of the Unknown.

Fear of the process is not having an actual strategy to follow step-by-step to know the path you have to take to get to the winner’s circle. These fears generally stem from three areas:

Lack of experience in risk-taking:

Women who haven’t taken risks in the past can’t adequately understand the comparison of a benefit over a risk. They have a hard time seeing how overcoming a risk can bring them benefits beyond the obvious. It takes someone with experience in risk-taking to point out these benefits and train someone to recognize that they are able to pivot as more information is received.

Women who have studied abroad or frequently travel are great at diminishing fear of the unknown, because they’ve had so many risky experiences where they’ve failed or had success – with language, cultural norms, moving to a new area, getting lost, etc that they realize the benefit of trying is awesome compared to the risk of failing.

Risks of the unknown become less and less scary because they’ve been there, done that and figured it out before. They understand that if they can overcome this challenge, the benefit will be huge.

When my clients ask these rhetorical questions, my answer is not “Oh yeah, I never thought of that. If you run out of time you’re screwed, so let’s not even do it.” Haha! That would never happen!
Instead, my clients expect a strategy as an answer.

What if you do run out of time? Well, I suppose you’ll be just half way there. Whoopdi-do.
What if you don’t have enough for everyone? Well, you’ll have to create a wait list and then make more.
What if it doesn’t work? Well, we’ll have to analyze why and create a new plan of action.

My point is that if you answer these questions and follow it down the rabbit hole, you’ll discover your fears are likely irrational and you’ll be much more certain about your need to take action.

Before I consider a new VIP client, I ask them to describe previous failures and we discuss their interpretation of these experiences. The top 10% are the ones that are able to focus on the benefits that out-weigh the risks, not a bunch of irrational fears.

Women who have not had an educational experience have a limited understanding of their abilities to grow and develop new skills. This isn’t about ability. We all are capable of learning, but if you haven’t stretch those muscles in a while, it’s going to be hard to believe it’s possible. Women that easily overcome this are the ones that are currently pursuing education in their life in any other area: a college student, a woman who signs up for snowboarding lessons rather than sitting out the trip, a woman who follows cookbooks to learn new recipes, someone who is always youtube’ing how to videos for everything from cleaning a coffee pot to programming a cell phone. These women know that if they can’t do it now, all they have to do is find someone to teach them how. This usually shows up in my coaching as “I can’t” and “I don’t” beliefs.

Someone is coachable when instead of saying I can’t or I don’t, they ask questions to learn:

Before I consider a new VIP client, I ask when was the last time you invested in your education. The top 10% are the ones that are educationally-focused.

Another common reason for fears is a one-dimensional identity. If we feel our identity is all wrapped up in one area, we’re less likely to take a risk that could result in failure. That’s why parents are criticized when they are only telling their kid how great they are in one area rather then pointing out skills in many areas of what makes them who they are. The women that are least likely to suffer from this are those that have a solid support system of people from areas outside of pageantry, like their husband, family, and best friends who know and love them for other strengths and skills that they own as an individual. They’re identity is multi-dimensional. They are a sister, wife, professional, mentor, volunteer, mother, and….beauty queen.

This usually shows up as the woman that “Wants to prove it to everyone that she can do it.” Or she believes that this will be the solution to all of her other problems. “If I just win Miss America, everyone will love me.” Not true, hunny. You need to get your credibility and self worth from other areas of life before a pageant win can even be in the cards.

Before I consider a new a VIP client, I want to make sure she is not a crown-chaser – the type of woman that has a one-track mind. My winners have a vision far greater than just the title, they want to impact their world and use all their areas of life to assist their pageant title and their career.

All people have these fears – even the most successful people. The difference is how they respond to their fear by taking action and pursuing their goal.

The difference between the average 90% and the women standing in the top 5 at the end of the pageant is that these 10% of elite women chose coachable over comfortable.

90% of people want to keep doing what they’re doing so they don’t have to do what they don’t already know.

It’s the 18-year old Miss America contestant who says: “What if I win this year and I don’t get all those years to learn how it’s done and make connections?” verses the one who says, “I better buckle down and get a strategy to get make up for my lack of experience.”

It’s the 35-year old woman who says, “I can’t be in a pageant now because all those other girls have been competing for years. I could never do that.” verses the top 10% who say, “I need to learn how to compete in a pageant against all these girls that have been doing it for years.”

Many women are terrified of the Top 5 On-stage question. I tell all my clients, if you want to get a crown on your head, you WILL answer an on-stage question, so stop avoiding it and start practicing!

The top 10% of contestants don’t rely on their excuses. They take a risk, get educated, and use their experience to advance themselves in pageants, career, relationships, and life. They get a strategy and get into the top 5.

Today, I want you to take charge of your pageant experience and overcome the fear of the unknown. If you feel you are ready to step into the Top 10% (remember, it’s not about ability it’s about willingness), then I invite you to schedule a free Strategy Call with me – for free.

Hey girl! Strategy Calls are no longer available. But, you may like our new course “Pageant interview Game Plan.” Click HERE to learn more.